David Gelernter is a ‘rare bird’. An unconverted Western intellectual who rejects Darwin’s theory of evolution.

Why highlight the story of a professor who gives up on Darwin but doesn’t become a “born again Christian”? Because that’s not a good look for Darwinism, is it? One expects Christians to reject Darwin. After all, they are biased, right? But Gelernter?

Here are the details in brief. David Gelernter (born 1955) is a writer, professor of computer science at Yale University and an erudite communicator. He survived a mail bomb sent to him in 1993, losing his right hand in the process. Clearly a fascinating man from a number of angles.

He wrote an article in the Spring 2019 edition of the Claremont Review of Books (Vol 19, No 2) called “Giving Up Darwin”. I have read a lot of articles and books critiquing Darwinism, but I would say without hesitation that, though relatively brief, Gelernter’s is one of the best. Read it for yourself.

Gelernter writes like a man bereaved. He mourns the passing of 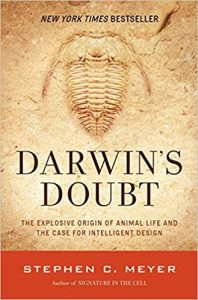 Darwin’s “brilliant and lovely theory”. It turns out he read Stephen Meyer’s book Darwin’s Doubt (2013) and his trust in the grand theory of Darwinism collapsed. Reading anti-Darwin books can be dangerous. Remember what happened when Michael Behe read Evolution a Theory in Crisis by Michael Denton? Now we have Darwin’s Black Box, The Edge of Evolution and Darwin Devolves!

Anyway, Gelernter says that Meyer’s book Darwin’s Doubt “demolishes” Darwin; “Few open-minded people will finish it with it with their faith in Darwin in tact.” After acknowledging that Darwin’s central idea of variation and natural selection does a good job at explaining small adjustments to already existing species (beak shape, fur density, wing style), Gelernter states that Darwin cannot explain how species originated. Which is a bit of a disaster for Darwin since his fame rests on a book called On the Origin of Species.

As far as the details go, Gelernter finds the Cambrian explosion particularly troublesome. It, and the fossil record in general, is a story of new fully formed animals popping into existence without precursors, only to disappear later unchanged. Clearly Darwin’s own question – “Why…is not every geological formation and every stratum full of…intermediate links?” gets louder and louder with every paleontological dig.

But it’s when Gelernter starts waxing eloquent about genetics that you will be really captivated. His bottom line is that after being challenged by Meyer and others, he looked at what Americans call “the math”. It turns out that there isn’t enough time, even allowing for all the billions of years of evolutionary history (which Gelernter accepts), to produce a single functional folding protein of 150 amino acids long by chance. Period. That’s the end of Darwinism right there. That one fact makes Darwinism mathematically, chemically, biologically and physically impossible. Why? Because the essence of the Darwinian mechanism is the production of new forms of life, which depend on the production of new shapes of protein, which in turn must spring from random mutations in DNA sequences, which is impossible. Repeat: impossible. There’s no point spelling out the whole the argument in detail here. Read Gelernter. Read Meyer’s Darwin’s Doubt. Read Behe’s Darwin Devolves. Watch Unlocking the Mystery of Origin.

What now for Gelernter? If you watch the programme below, where he appears in an interview produced by the Hoover Institution alongside Stephen Meyer and David Berlinski, you’ll get an insider’s view on the ideological bent that has taken over the field of science. To institutions like Yale, Harvard, MIT, Oxford and Cambridge, Darwinism is more than a theory. It is an unchallengeable paradigm that crushes any dissenting views with “bitter, fundamental, angry, outraged rejection which comes nowhere near scientific or intellectual discussion”. Of course, we knew that already, but it’s interesting getting it confirmed from an insider.

The programme is fascinating and frustrating in equal measure. Berlinski and Gelernter remain stuck in no man’s land. They are honest enough to reject Darwin, but they remain closed to Biblical revelation. Why? Because empiricism and rationalism are ultimately dead ends. If the conscience is not touched and the heart remains closed to the Holy Spirit’s conviction and the truth of the Word of God – leading to repentance towards God and faith in the Lord Jesus Christ – a million years from now these high brow discussions won’t make a pin of difference to the destiny of the participants. It’s not enough to give up Darwin. The “wisdom of men” must be repudiated and the “wisdom of God” – Christ crucified – must be received.

Previous
The most common objection to God - answered.
Next
Is the human eye wired backwards?
Oct 21 Back to Basics Salvation…
May 19 Is the Bible the Word of…